The 2013 Holiday Decision Maker
For once, we are very happy with the Repeats!

One of our Partners, Harold Lawrence, has recently returned from a long-awaited and much-enjoyed 8 week trip to Australia, where he touched down in many iconic towns and territories along the way.

As he travelled, he picked up a variety of Australian national and local newspapers that be brought back in his trusty suitcase for us to read back in the office.  It has been an interesting and illuminating experience to read their headlines and content to gather information about what it is really like to live in Australia, what is regarded as newsworthy, and more about their society in general.

I have carefully snipped out (a la the archetypal sinister stalker type!) the more eye-catching headlines and assembled them grouped with other headlines from the same paper.  You can see all of the headlines at the bottom of this article. 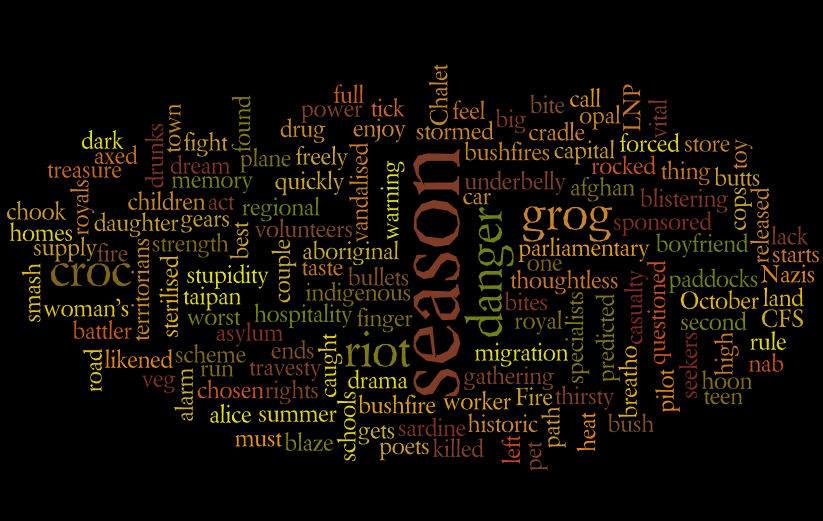 There appears to be quite a few differences between Antipodean news-sheets and newspapers based in the UK, from browsing the selection that Harold returned with. The general tone of Oz newspapers is much more informal, and there is liberal usage of slang terms such as ‘grog’ (alcohol) ‘chook’ (chicken) and ‘hoon’ (an OZ version of an ASBO recipient!)

In the regional papers where the readership is small and tightknit, there are front-page memorials to local characters that have passed away, usually from natural causes, regaling readers with colourful anecdotes about their life and times. No doubt these characters would be known to many locally, and it is a mark of affection and respect that they are remembered in this way.  In many ways, reading the regional Australian newspapers is akin to going back in time to when life in the UK was more centred on the ‘community’ and neighbours literally did ‘become good friends!’ (yes, this is a nod to the Aussie soap…)

Some of the stories are charming and heartwarming, but you wonder if they would be considered ‘newsworthy’ by an editor in this country e.g. the story –  ‘pet chook found’ which chronicles how a chicken escaped from home, and was then reunited with its owner after an appeal in the paper (which was fairly unremarkable in essence, as there was no ‘fowl’ play at work!):

The indigenous wildlife is the feature of many a story, be it 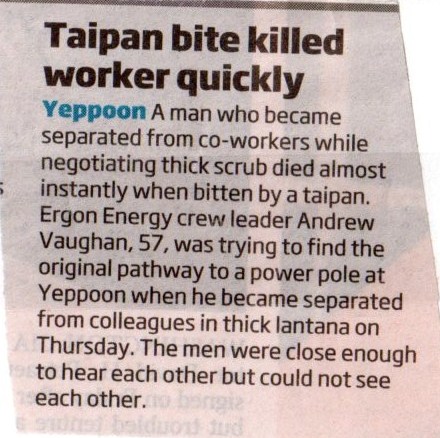 Tthese are stories that are thankfully unlikely to occur in the UK.  I was a bit surprised to see no mention of spiders, but perhaps it was an unusually quiet week for arachnid activity…

Bushfires are a notable and serious hazard in the dry season in  Australia and appear in many headlines:

The predictions for heatwaves and subsequent problems with the tinder-dry foliage have sadly come true at the moment, with many people being evacuated from their homes and many hectares of land being lost.

It seems that the perils of ‘grog’ (which conjures up images of rowdy pirates indulging in their tipple of choice!) are a real concern, with alcoholic antisocial behaviour seemingly an issue downunder as well as in this country, with the banners:

typifying the kinds of problems that are perhaps likely to happen in  isolated outback towns with not many other diversions to be enjoyed.

It is interesting to note that the British royals are an enduring area of interest, with reports of where they have visited on a recent tour, and what they did.  Although there are obviously Republicans who have no interest in the movements of our Royal family, there are clearly stalwarts who continue to be interested in a Royal visit to their Commonwealth country:

Reading the Australian newspaper headlines did underline many differences related to the Australian climate, the creatures that live there and their choice of language as opposed to ours.  However, there were obvious similarities e.g. concerns for the wellbeing of our children, a rejection of antisocial behaviour and violence, and a willingness to improve the community that we are living in.

News, by its very nature, often reflects the negative actions of others, and things to condemn or worry about, and of course many topics that make the news in Australia, are also likely to be in the news here too.

Harold, for his part, enjoyed his trip immensely, and while it may not have been newsworthy in its own right, he had only positive things to say about his experiences and the characters that he met along the way.

If you are planning a holiday to Australia, be sure to obtain travel insurance before you depart, so that you are covered for unexpected medical problems and potential repatriation back to the UK, as well as a host of other invaluable benefits. Similarly, if you are emigrating on a one-way trip to Australia, then make sure you organise one-way or emigration insurance to cover you during your journey downunder, and for a specified period of time as you settle in (with one of our First Class emigration travel insurance policies).

A selection of regional and national Australian Newspaper Headlines 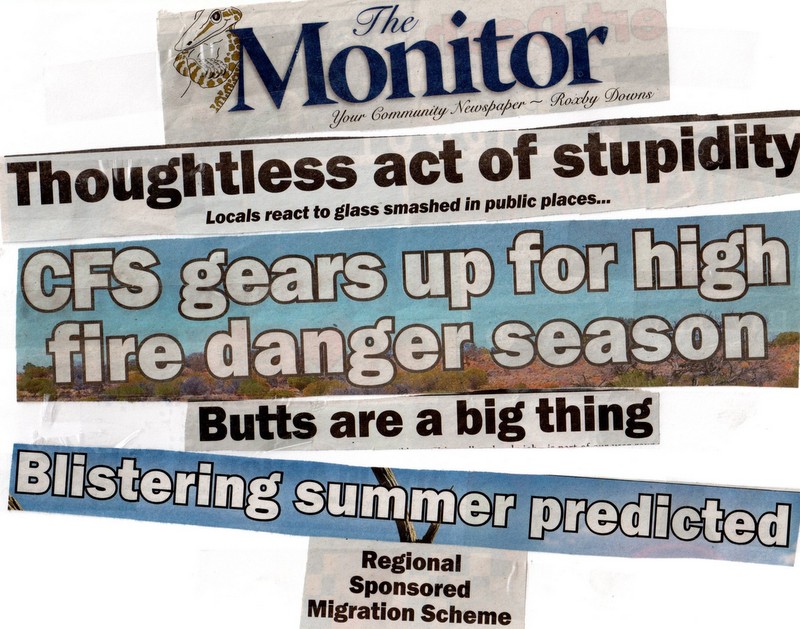 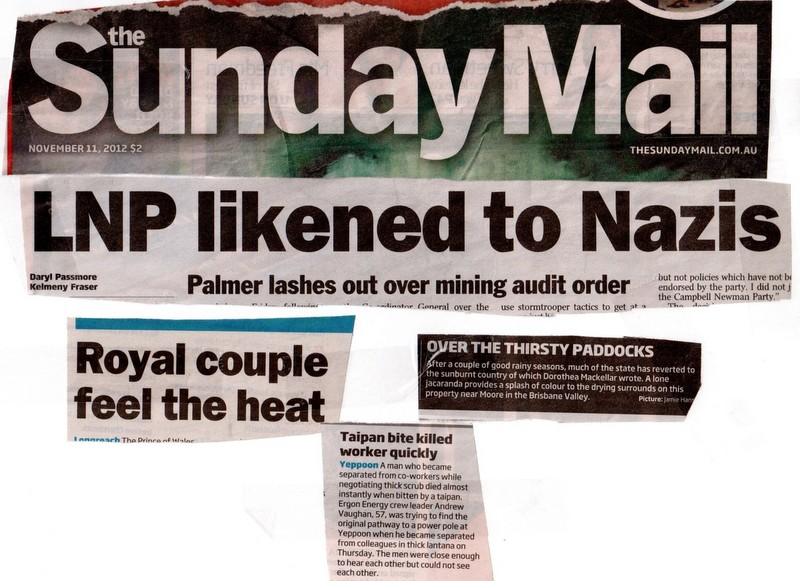 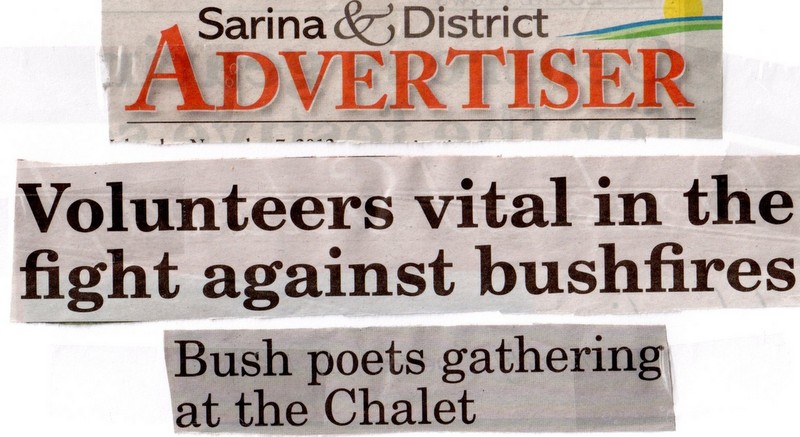 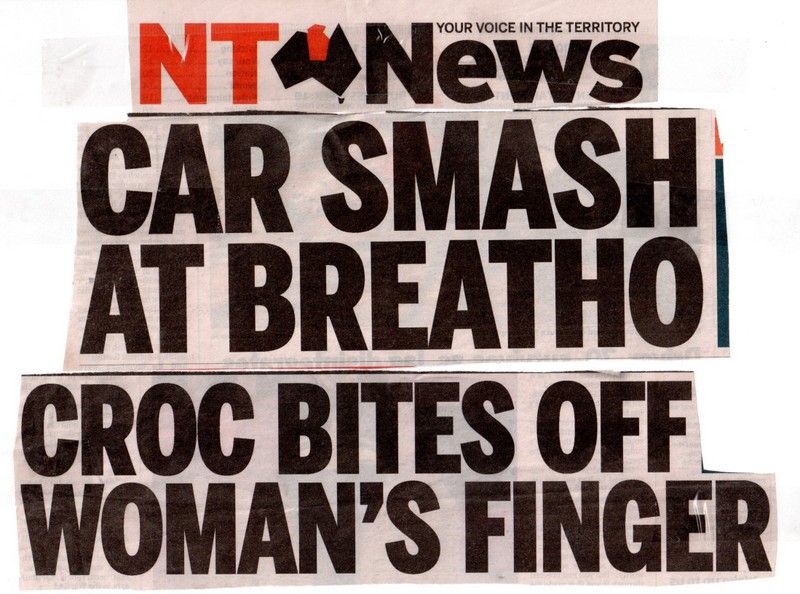 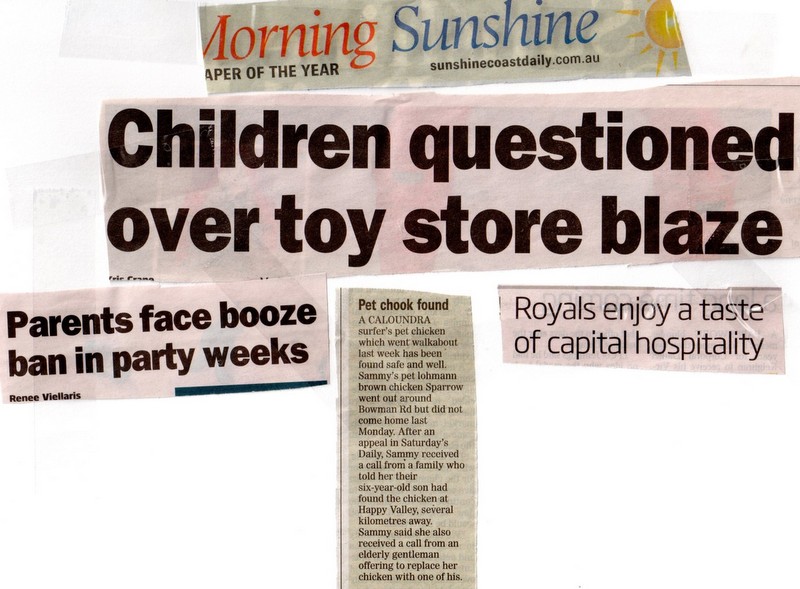 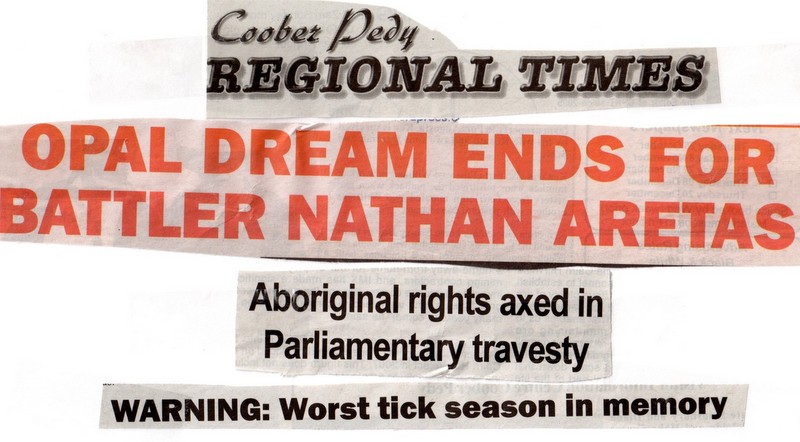 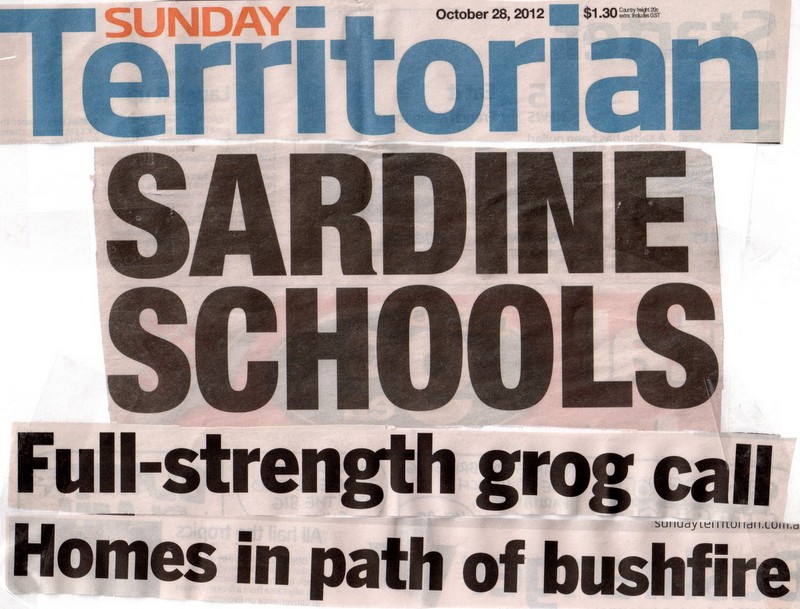 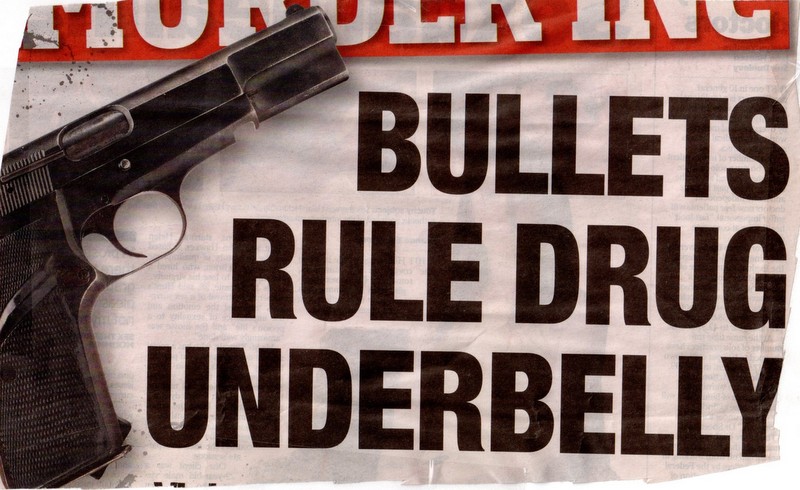 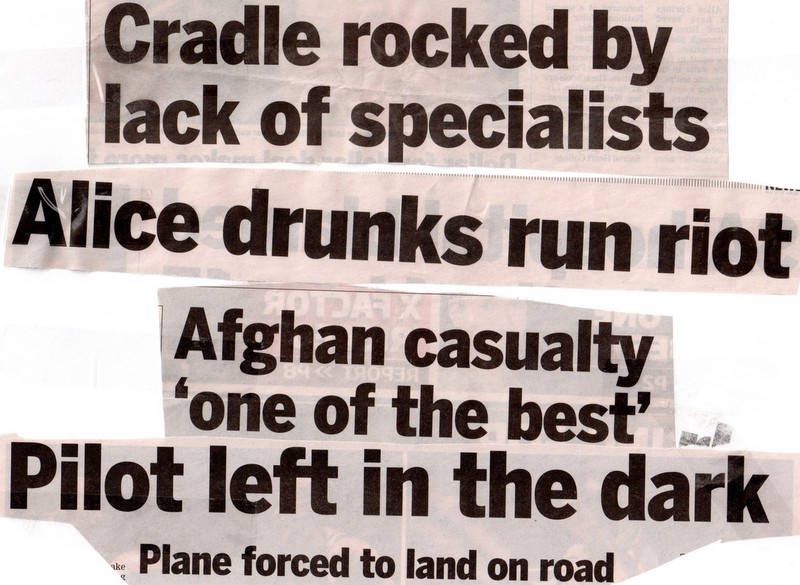 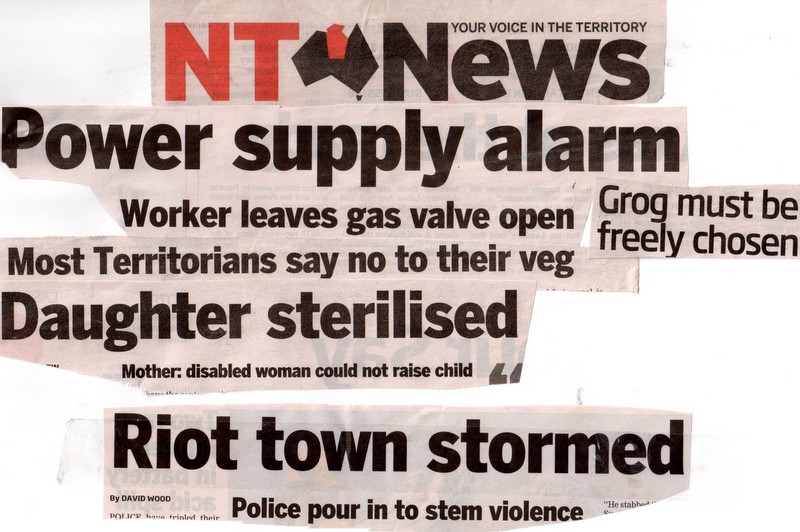