Hidden Gems Travel Tales – now available on Kindle
Quick – March to a great holiday inspired by what you’ve been reading.

Las Vegas – land of glitz, glamour, gambling and the gaudy – can you really do it proud in a short break? It is of course, a long-haul flight across the Atlantic to the USA, so it is naturally a good idea to spend as long there as time and money allows. But, if you’ve only got a relatively short time to soak up all that this unashamedly brash location has to offer, then you can still experience Las Vegas in a nutshell.

Las Vegas is the most populous city in the US desert state of Nevada, and is internationally renowned as a major resort city boasting great shopping, fine dining, gambling and nightlife – as well as being famed for a venue for quirky (and sometimes Elvis-themed!) weddings.

One of the entrants in our “Hidden Gems” travel writing competition wrote about an excursion to the Hollywood Hills that she took from Las Vegas, whilst on bridesmaid duties.  You can read about it by looking at the “Hidden Gems” map and scrolling down to Hollywood, Los Angeles or selecting the Los Angeles pin below:

Mark, who is our Business Development Manager, has recently travelled on a dream holiday to Las Vegas with his wife, and another couple, for a 5-night stay.  They were determined to wring as much of the Vegas-experience out of their limited time, as they possibly could, and a lot of this was achieved through thorough research and booking of shows and activities before departing the UK.  Sometimes it is part of the fun of a holiday to go-with-the-flow and leave without a tightly-scheduled itinerary, but when time is at a premium, and you are spoilt for choice regarding ways to spend it, then it can be prudent to leave with an overall plan (even if it’s not entirely set in stone).

Mark and his travelling companions were keen to see as many of the world-famous Las Vegas shows as they could squeeze into their precious time.  There is a vast array of shows to choose from, and new shows are regularly introduced.  A hotly-anticipated show that is starting in December is Britney Spears: Piece of Me for a two year residency in Planet Hollywood, Nevada.

Mark and his lucky travel companions were spoilt for choice, but these are the ones they plumped for: 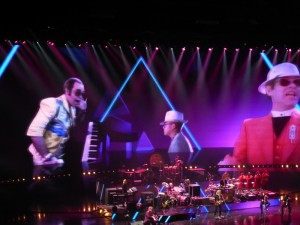 Sir Elton John was recently honoured by becoming the very first recipient of the BRIT Icon award recognising the lasting impact that his music and the man himself, have had on UK culture.  Since first collaborating with Bernie Taupin in 1967, he has celebrated hit after hit with his trademark catchy pop songs and poignant ballads delivered with his trademark flamboyant flair.  He has also been recognised by winning five Grammys and a Grammy Legend award, been inducted into the Rock & Roll Hall of fame and received both the Academy and Tony Awards for his contributions in the Lion King and Aida.  He also composed the music for the multi-award winning musical Billy Elliot.

In the Las Vegas show (so called because of the amazing piano that is the centrepiece of the show featuring 68 LED video screens) Elton is accompanied by his band and he bills it as “a gargantuan feast of music and imagery”.  The shows have been running since 2011 and have been receiving rave reviews praising the stage set-up and lighting as well as the personality, warmth and humour of the great man himself, whilst delivering both new songs as well as the older favourites.

The Best Bits – The audience interaction was superb, with lots of banter and humour, I even forgave his regular name-dropping s his anecdotes were so entertaining.  It was great to see Elton invite half of the audience in the stalls up onto the main stage to dance around his piano for one song.

The Could be Better bits – Nothing.  The set design and visual effects were truly great.

Would you recommend it? – Yes, it’s fairly costly, but you’re paying for not only Elton John, but also the thrill of the Vegas factor.  It was quite an intimate concert, so you felt like you were close to the action.

The internationally known and admired Cirque de Soleil cast of world-class acrobats, synchronized swimmers, divers and aerialists “perform in, on, and above water, creating a seamless and ever-changing canvas of tableaus.”  There are several Cirque de Soleil shows in Las Vegas, so what is so special about ‘O’? Reviews are overwhelmingly positive and praise the awe-inspiring technical expertise, mastery, the visual spectacle and split-second timing that make this water-based show with high dives and water tricks so memorable and breath-taking.  Cirque-de Soleil are nearing their 30th anniversary and have an amazing pedigree for creating sumptuous shows entwining music, story and amazingly daring and athletic stunts and feats of acrobatics all around the world.  Many reviewers rate this particular show as the best one that they have ever seen – but what did Mark think?

The Best Bits – All of it! Everyone we spoke to before the show, said to us that we have to see it for ourselves to understand it.  They were  quite right as it’s a show that keeps giving you surprises.  The work that goes on beneath the water must make up two thirds of the show.  This was proven when all the underwater divers came up on a platform and there must have been at least ten of them.  The tricks and acrobatics were breathtaking, and there were always so many things to look at on-stage that it was a visual feast.

The Could be Better bits – none 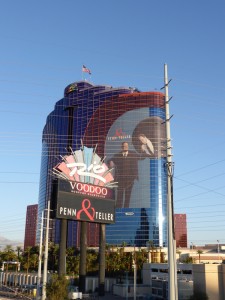 Penn and Teller aren’t your average stage magicians and have a unique and edgy style and appeal all their own, which has led to great success and world-wide fame since pairing up in the late 1970’s.  They are known as the ‘bad boys of magic’ for supposedly revealing how tricks are done and including an element of gore and satirical comedy in their shows of stupefying tricks and illusions.  An extra bonus for these shows is that they meet and greet fans for photos and autographs in the lobby after the show, so everyone gets a chance to chew the fat if they want to.  Reviews are very good for the show and include comments praising their pairing of Penn’s comedy and Teller’s silent vaudeville, with many enjoying their revelations about how the tricks are done, which somehow adds to the admiration of the pair.  You may know Penn and Teller from their runs on Broadway, their many television appearances or you may have seen their star on the Hollywood Walk of Fame.  However they have been picked up on your radar, is this show worthy of your audience?

The Best Bits – There was great interaction between the pair of them, and also great interaction with the audience. They had a very funny way of presenting the trick and my favourite was the last one – Magic Bullets.

The Could be Better Bits – Nothing really.  They change the tricks every night so no one show is ever the same as another. 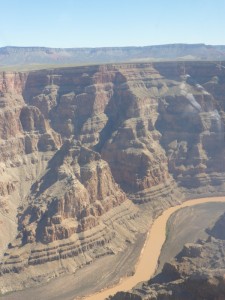 Apart from enjoying the shows, Mark also booked a Grand Canyon Air and Land helicopter Tour before he left the UK.  There are many options for Grand Canyon Tours available including some that are ‘air only’ where you fly over the National Park, but don’t land, some that tour Indian territory, a Skywalk odyssey or an adventure that includes rafting on the Colorado River.  Mark and his travelling group opted for a Grand Canyon Explorer Tour where there’s a flight to the Grand Canyon’s South Rim aboard a Maverick helicopter, then ground transportation to explore the Grand Canyon National Park to enjoy the amazing views, incredible rock formation and walking trails. There is also a gourmet box lunch to enjoy in what must make for a remarkable picnic setting before making your way back to Las Vegas by air.  The entire trip lasted 7 and a half hours, with a complimentary shuttle back to his hotel, so what did Mark make of this excursion to such an iconic natural wonder?

The Best Bits – Everything.  If you’re going to see the Canyon, this is the only way to do it.  The flight to the Canyon over Lake Mead is great and you gain an appreciation of how big it really is.  The colours and beauty of the Canyon is just breathtaking.  Stopping for a champagne lunch and talking to Chuck our pilot was great.  The tour ends with a fly-over of downtown Las Vegas and the Strip.

The Could be Better bits – None.  You see the Hoover Dam Lake, Lake Mead, the Canyon and the Strip.  It is a little expensive, but the fuel alone costs $300 – and that’ American fuel prices!