Crazy About Conkers!
An England Supporters guide to the Brazil World Cup 2014

Supermarkets are now stocking their shelves with enticing festive fare, eager to tempt us all into our annual Christmas indulgences.  Even within a singular supermarket, there is a plethora of mince pies to choose from, ranging 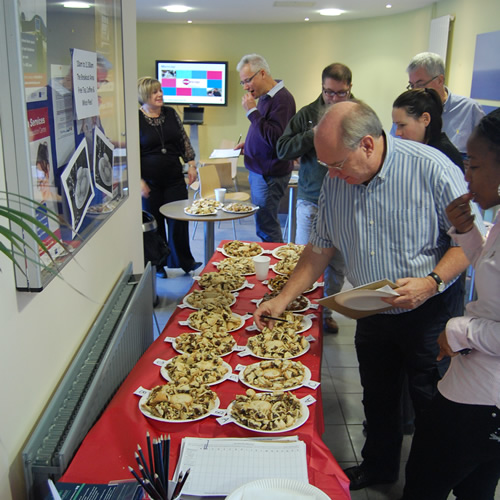 from the most basic budget model to the top-of-the-range gourmet mince-pie creation.  Mince-pies are a comforting, festive staple that every household should have in stock over the coming months, in case of unexpected guests, hungry carol singers turning up on the doorstep (does that happen any more?!) or an urge for some comforting  sweetness and spice on a bitter Winters evening.

We have bravely entered the fray and made it our mission to find the best of the myriad of mince-pies on the market, and to determine if the supermarket’s premium brands really are worth the extra pennies, or whether the standard mid-range offerings can be just as tasty and satisfying.  To expand upon the opinions in our office (refined and expert as they are!) we hosted a mince-pie tasting session within our office development “The Innovation Centre”, where we invited others to channel their inner Mary Berry or Paul Hollywood and sample the different mince-pies on offer.

They were invited to pass judgement on the following areas, and give each section marks out of 10:

Appearance and Size – How attractive and well-finished is it? Is it sugared? How does it measure up

Pastry – What is the texture like? Is it a good colour? Is it too crumbly? Does it taste good?

Mincemeat filling – Does it taste good? Does it have a good texture? Is there enough of it?

To add a bit of interest to the process, we challenged our resident culinary-enthusiast Steve to come up with a ‘Go Walkabout Gourmet Mince Pie’ to challenge the supermarket mass-produced versions.  We wondered how his humble homemade version would compare when pitted against the best that the big boys can muster.  To this end, we challenged our taste testers to try and identify Steve’s (the wannabe Heston Blumenthal!) best efforts, they were also asked to identify their absolute favourite of the 19 on offer. Thirty-five hardy souls rose to the challenge of casting their eye over each of the mince pies and sampling a portion of each.  In retrospect (and after many a beleaguered moan from our taste testers at the end of their gargantuan stint), we did have an awful lot of samples, and they are incredibly filling – so not everybody managed to haul themselves over the finish line and sample each and every one.  When we collected and collated the score sheets, 20 participants had the stamina and tenacity to try every pie and complete their score sheet in full.  We are very grateful to everyone who took part, and seemed to take the whole taste test very seriously indeed! Read on for the results tables and more details about the pies which came out on top…

What was the winning overall pie?

It just goes to show, that despite all the expertise the supermarkets can muster, you can’t beat some handmade love and attention…

Rather surprisingly (and we kept very quiet about which was our homemade pies, to avoid any influence over the voting) Steve’s homemade creation won after all the scores were tallied up.  It just goes to show, that despite all the expertise the supermarkets can muster, you can’t beat some handmade love and attention – and of course, the recipe has to be a winner too! Steve’s lovingly crafted pies were very attractive and stood out from the beige mince pie crowd, as they had a slice of tangerine on top.  Along with Heston’s golden-brown offerings, they did look very different to the standard mince-pie, which could well have accounted for the fact that 11 people identified Steve’s as the homemade variety, followed by 5 people surmising that Heston’s must be the one shipped up in a domestic kitchen.  Interestingly, 5 people were of the opinion that the standard Tesco Mince Pies were homemade, perhaps because of the rather unfortunate leakage that spoiled their appearance and made them look decidedly amateur! 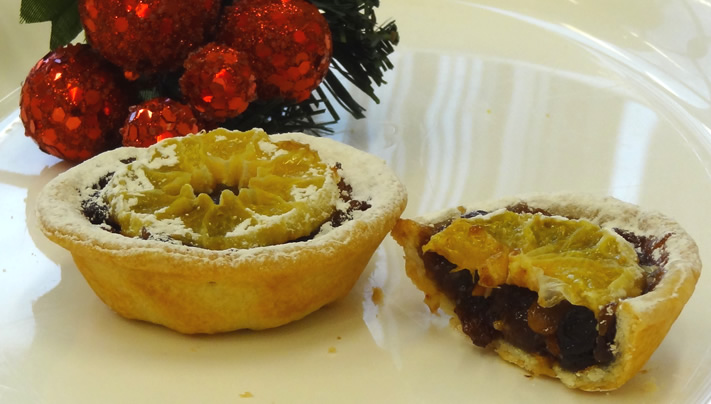 So what made Steve’s mince pies so good? Probably their winning ace was their freshness, as they had only been baked the night before the tasting.  Steve also added some extra elements of flavour with the addition of cherry liqueur, glace cherries and amaretto.  So, despite the best efforts of the supermarkets, it seems that fresh is ultimately best, and if you’re prepared to have a go, then mince pies are surprisingly easy and quick to make.  To see Steve’s recipe, and maybe whip up a batch yourself, you can view the recipe here.

Of the winning mince pies these are the ones you may prefer if you:

Are on a tighter budget – Heston’s may have been the winner, but it is undeniable that they are comparatively pricey at 58p per pie, which is an awful lot more expensive than any of the other pies.  The cheapest of the remaining pies in the Top 5 is undoubtedly the Sainsbury’s Deep Mince Pies which work out at a very reasonable 22p a pie. Unsurprisingly, the real bargain-basement pies offered by all of the supermarkets came out bottom of the pie-le(!) , they all looked very small in comparison to the others, bland and unappealing lookswise, and didn’t contain much filling.

Are watching your weight – The real bargain-basement budget mince pies contained fewer calories – because they were so much smaller and more sparsely-filled than their more luxurious counterparts.  The pie with the lowest calorie count in the Top 5 (and the overall winner) was Heston from Waitrose, which contained 194 calories (I know, it’s still a fair whack of your daily allowance!) in comparison to calorie counts well over 200 from the other well-performing pies.

We hope that our extensive taste test has helped give you some ideas about which mince pies might be the best choice for you this Christmas.  Of course, one thing the tasting clearly demonstrated is that preference is a very individual thing, and maybe it would be best for you to undertake your own taste test just to be sure of your favourite! We would love to hear from you to see if your favourite tallies with the findings in our test, or if you discover a winner of your own…Also, we’d love to see photos if you’ve followed Steve’s winning recipe and made a batch of your own, and we hope you enjoy them as much as our tasters did.

The full results (click to open a larger version):