The Optimism of Youth – England will win the World Cup!
Read the best of the entries in our Reinvention Travel writing competition 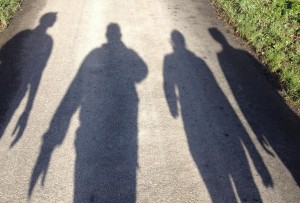 If 2014 is going to be the year where you set yourself a personal challenge – and achieve it – this challenge of endurance, fitness and stamina, might be the one for you. You can do it purely as a personal challenge, as a goal to help you get fitter and also as a means of raising money for a good cause.  And if you do decide to go for it, you may well end up on a mountain alongside our very own Mark.  If you ring us to set up a travel insurance policy or to ask for some help and advice, you may well end up speaking to him and benefitting from his travel insurance knowledge and expertise. Now he is turning his attention to his own personal challenge, which he will be doing in June.

Mark is planning to undertake a momentous challenge alongside his wife, and a group of their friends.  Mark is a keen walker, who often walks to or from work, and is taking this interest a whole lot further by undertaking to conquer the ‘National Three Peaks Challenge.’

The ‘National Three Peaks Challenge’ is a well-established extreme physical and mental challenge that involves conquering the peaks of the highest mountains in England, Scotland and Wales – namely Scaffell Pike, Ben Nevis and Snowdon.

Scaffell Pike
The highest mountain in England is located in the picturesque Lake District National Park.  It is 978 metres tall and the summit was donated to the National Trust in 1919:

“in perpetual memory of the men of the Lake District who fell for God and King, for freedom peace and right in the Great War 1914 – 1918 …”

Ben Nevis
The highest mountain in not only Scotland, but the British Isles as a whole, at 1344 metres tall is located at the western end of the Grampian Mountains, close to the town of Fort William.  The summit is the collapsed dome of an ancient volcano. There are also the ruins of an observatory which was used to collect meteorological data, and was manned between 1883 and 1904.

Snowdon
The highest mountain in Wales at 1085 metres tall, and situated in the Snowdonia National Park is dubbed “probably the busiest mountain in Britain” and is a national nature reserve blessed with rare flora and fauna.

The challenge involves climbing the 3 aforementioned rocky giants of the UK landscape within the magic 24 hour mark – which will obviously entail some tricky nocturnal climbing.  Each mountain is expected to take up to 5 hours to climb and descend for someone who is a “standard strong walker.”  As the peaks are so spread out, there is a need to get from one to another, which generally involves being driven from the foot of one mountain to the next (the driver will most probably not be someone who is actually undertaking the challenge themselves) – allowing the climbers to grab some food and some shut-eye – in between mountain climbs.

The record for the fastest National 3 Peaks Challenge is an impressive 11 hours and 56 minutes, which I don’t think Mark and his team will be too worried about!

It’s important to prepare yourself physically and mentally for the challenge ahead, as you will need to be fitter than average in order to tackle a challenge of these proportions – not for the faint-hearted or the undertrained.  It is recommended that you build up a steady, regular fitness routine of walking (preferably over challenging terrain, and with uphill sections).  You can start on half an hour a day, increasing it to an hour if time allows.  If you have the opportunity, it is helpful to visit a National Park (or one of the actual mountains) to get used to the kind of terrain that you will be tackling, as well as the altitude.

Find out more about training for the National 3 Peaks Challenge as well as other endurance challenges.

Many people choose to undertake the challenge with a group of others, which reduces the dangers inherent with a solo trek.  The group can support each other by going at a reasonable pace, so that no-one gets left behind, and keeping an eye on each other’s wellbeing.  Obviously it makes sense to let others who aren’t taking part in the Challenge, know your itinerary and keep them informed with your progress.  Make sure that you take with you:

–         The requisite Explorer maps for each mountain, so that you don’t get lost: The Ordnance Survey Map for Snowdon, The English Lakes and Ben Nevis

–         A comfortable and roomy backpack to carry all of your essentials, but remember that you will be carrying all of your equipment a long way, so make sure it is really necessary.  Some of the equipment you will be taking with you will relate to keeping you safe, or to helping you out if things go awry.  If you are travelling as a group, decide between you what you need to take e.g. first aid kit and survival blanket – and then share the equipment out between you – to share the load.

Find out more about safety here.

There are a few variations on the order of the mountains that you undertake and the timings that you set off, depending on whether you are keen to miss rush-hour traffic and which mountain you want to tackle in the more difficult hours of darkness.

Food is the fuel for energy so is an important part of keeping you going for your endurance walk.  It can be easily overlooked for convenience, and consist of hastily grabbed junk food from service stations, which doesn’t help give you the slow-release of energy that will help you on your way.  You also need to keep your fluid levels up, to keep you hydrated, you may even consider a hydration backpack to leave your hands free for balance.

Find out more about nutrition here.

I have grilled Mark about his preparation so far, and how he feels about the monumental challenge ahead.  Here, he talks about how his preparations are going so far:

When will you be doing the Challenge?

We will be doing the challenge on the 1st June, we have decided to start on the afternoon of the 1st,  so we can try and do all three peaks in daylight.  This was what was advised to us.

Why did you decide to do it?

It is a lifetime challenge and it was the next step forward for some of us after doing half marathons in the past couple of years.

What benefits do you think it will have for you personally?

Fitness is the key one, however, also a sense of achievement and commitment if we do manage to do it in time.

What is your biggest fitness achievement to date?

Running the Hastings Half Marathon.  I am hoping to lose 2 stone getting fit for this challenge so there is the added health benefit as well.

Have you ever climbed a mountain, or been to any of the mountains involved?

No, and that is the scary thing for pretty much everyone.

In December, I started with regular flat walks ranging from 3 – 5 miles.  In January, I built the distance up to 15-16 miles, mainly on the flat ground.  In February and March, we are going on longer walks over the Seven Sisters and South Downs.  Going forward, we will try to get as much hill-walking in as possible.

What equipment have you got/will you be taking with you?

The first things we bought were walking boots, so they are well worn-in and our feet are used to walking uphill and downhill in the boots.  We have also bought walking socks that are meant to prevent blisters.  In the coming weeks, we will be getting walking trousers and jackets.  The main thing was good quality walking boots and socks that have had plenty of training hours put into them.

How have you found training as a group?

It’s good, as it allows you all to socialise and get to know what people’s strengths and weaknesses are.  It also gets us used to walking at a group pace.  We will be as quick as the slowest walker in the Challenge.

What will you do about travelling between mountains?

We have hired a minibus and have a dedicated driver for the weekend.  No-one is attempting to drive and do the Challenge.  I’m pretty sure it’s not going to smell too pleasant in the minibus after the weekend!

What plans do you have for eating on the go, and accommodation?

We have booked a hotel close to Ben Nevis in Scotland for the Saturday night, and a Premier Inn in Bangor for a well-earned rest after we have done the Challenge, this will be on Monday night. We will be eating on the go and will be taking energy bars and fluids on the mountains.

What are your biggest worries?

Injury, the weather when we come to do the Challenge, and traffic.  Sometimes people fail the challenge due to the traffic and journey times between each mountain.  A lot in the group are worried about tiredness as sleeping in a minibus is not going to be great.

What do you think you will enjoy the most about the experience?

The sense of achievement, the views and I’m sure there’ll be a few good laughs along the way.  I expect that the Premier Inn in Bangor on Monday night is going to be very well-received by all!

What safety measures will you put in place?

We are using a Guide for all of the Three Peaks, they know the route and what problems to be aware of.  The weather can change in a matter of minutes and you have to be prepared.

Which mountain are you most looking forward to tackling?

Snowdon, mainly because it’s the last, and if we do it in time we have achieved our goal!

Will you be spending any time in any of the areas around the mountains?

Apart from the hotels, nothing else.  However, I am  sure we will be taking a few group photos at the top of the Peaks, but nothing that takes too much time.  Time is key to this challenge.

How do you plan to stay on track and not get lost?

The Guide will be a big help, as they know the routes, there’s nothing worse than getting lost.  The use of a designated driver is key, as we can all relax between the peaks.  We will all have a map, compass and first aid kits.  Preparation is the key and we will have done Snowdon before in April, so hopefully when we are tired and hurting, knowing we have done may give us the effort for each step en route to completing the challenge.

What message would you give to others who are thinking about undertaking the Three Peaks Challenge?

Do not underestimate the challenge you are about to take on.  This is not just a case of walking a few hills and that’s it.  In total, you will be walking nearly 24 miles.  You need to train and prepare in the same way that you would train for a marathon.  The more work you put in before the Challenge, the less of a shock it will be when you actually do it for real!

We at Go Walkabout wish Mark and the rest of the team the very best of luck in their monumental challenge, we have every faith that they will be successful!

We will keep you updated via Twitter and Facebook about their progress in training and how they fare with the Challenge in June.