Our Top Ten Facts about Uruguay: Football and Beyond..

Many of us are looking forward to watching England’s 2nd match in their Brazilian World Cup campaign tonight at 8pm on ITV. 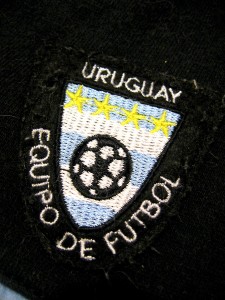 Billed as the ‘match of death’ – both sides have lost their first match (England 1-0 to Italy and Uruguay 1-3 to Costa Rica) and will be determined to get a valuable win under their belt.

Many England fans will be watching to see if Luis Suarez, who plays for Liverpool in the Premiership will be returning in a talismanic striking role for Uruguay after knee surgery in May.  Steven Gerrard, says the banter with Suarez about the match has been good fun in the run up to the World Cup, but that it will be business as usual for the England Captain against the whole Uruguay side – team-mate or not.

England may benefit from the change of location from the Amazonian humidity of Rio de Janeiro to the more temperate Sao Paolo, and are optimistic of a win after their positive showing on Saturday night, where many felt they were unlucky to lose to Italy.

Lots of fact fans know that Uruguay won the inaugural World Cup back in 1930, and some people may be aware that they also won the title in 1950 too – so they obviously have a pretty good international football pedigree – but what else is there to know about the South American neighbour of Brazil?

We’ve rounded up some interesting and entertaining facts about Uruguay:

–         Add beef, a slice of mozzarella and tomato, a scattering of olives, a fried or hard-boiled egg, a slice of ham and a rasher of bacon – not for vegetarians then!  Optional extras are cucumber, fried peppers and a dollop of mayonnaise.

If this doesn’t touch the sides, treat yourself to a portion of fries too.

So the country Uruguay clearly has a lot going for it, and I would be happy to take a trip to this land of cowboy culture, native wildlife and fascinating history.

But tonight, at 8pm, the nation will be hoping that we can score more goals than them, win the match and go into our final group match against Costa Rica on a winning streak.