Want to emigrate? How do you make sure that the grass really is greener?….
All the World Cup Countries.. but in Food!

What next after England’s premature exit from the world Cup in Brazil?

So, England are out of the World Cup…….our hopes were raised for progression after an encouraging Italy game, but cruelly dashed by our dismal defeat against a Uruguay team that contained the brilliant Suarez who scored a brace, returning from surgery earlier in the year. 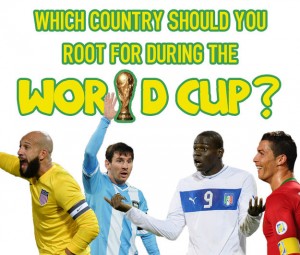 The patriotic England flags have now been put back in mothballs, and we are left wondering how we can still enjoy the spectacle and atmosphere of the World Cup in Brazil now that our national team is no longer a part of it?

As armchair fans we have suffered a mini-bereavement, deprived of the emotional rollercoaster of supporting Rooney et al further into the tournament, but spare a thought for all of the hardcore fans who have followed England to Brazil on a very expensive supporters exercise – what will they do now?

Well, we think that there is still much to look forward to in coming months, and here’s a few of them.

Other reasons to be cheerful –

The weather – the weather has been balmy hot in England recently, and the Met Office have said there is a 25% chance that it may be the hottest Summer ever.  So dust of the BBQ and enjoy soaking up some Vitamin-D enriched rays.

Wimbledon – OK, so the ball is a lot smaller, and everything is a lot more civilized in the world of tennis than football, you don’t see Cliff Richard at a football match after all…but, we can watch Andy Murray, safe in the knowledge that he is capable of winning it – he did it last year!

Glastonbury – this kicks off on Wednesday 25th June and boasts some top-class acts for all music fans to enjoy.  Even if you aren’t lucky enough to be there in person for ‘the best festival in the world’, there is coverage on the radio and TV, so you can catch the highlights.  Acts to watch out for include Ellie Goulding, Lily Allen and Kasabian.

School Sports Days – You may not end up basking in the reflected glory of your victorious offspring and the dodgy knee might impede you from taking the spoils in the Dad’s Race, but there is enough drama, tears and petulance at a school sports day to evoke many a World Cup memory!

Go on holiday – peak holiday season is approaching, and you may be planning to get away from it all in foreign climes…just be aware though that the inhabitants of the country you are jetting off to, may have a depression of their own hanging over them..namely, past champions and fellow early-exiters Spain!

To carry on having an interest in the World Cup, why not adopt a new team to support? Maybe you have a team in mind, who have impressed you with their skill, talent and attitude, but if not, perhaps this fun quiz can help you make up your mind. The only issue is that I answered and got England…..there is no escape!

Which country should you root for during the World Cup?

Let us know how you are getting over the disappointment of England’s World Cup exit.  If you have booked a trip away from the UK to lift your mood, get in touch with us as we are happy to talk to you about your travel insurance requirements.  We pride ourselves on our great customer service and levels of customer satisfaction, and you can check out our feedback on independent review site Feefo.