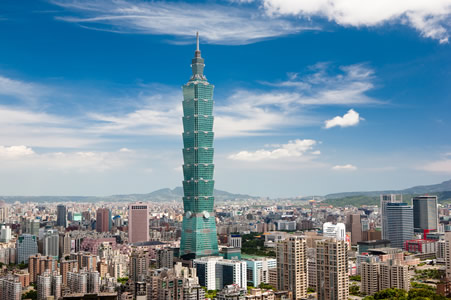 For many, including myself, a mildly undulating run is testing enough.  However, there is a growing group of avid runners who want to throw gravity in the mix and take part in vertical runs.  These typically involve scaling the stairwells of some of the World’s tallest buildings.

The Vertical World Circuit takes in towers including the Empire State Building, the International Conference Centre in Hong Kong and, the one with the highest race height, Taipei 101.  For several years the tallest building in the World, Taipei 101 still hosts the World’s fastest elevators – a fact that’s made somewhat redundant by this challenge.  Finding myself scheduled to be in Taiwan on the day of the race (3rd May 2015) I duly signed up to be one of the 4000 individual runners taking part in the event.  Spaces were filled in the space of a day, so if planning to take part in the future, check the event website and sign up as soon as entry opens.

Race day arrived with little preparation in the preceding weeks other than a 8km training run a week before and a failed pledge to take the stairs rather than the lift at every opportunity.  With an approximate 9am start time (runners are released at 2 second intervals) a health check had to be completed around 8am.  This included a brief medical questionnaire and the deceptively testing task of balancing with one foot in front of the other with eyes closed and arms folded for thirty seconds.  The eyes closed portion of the instructions was somewhat lost in translation resulting in failure of the test, but thankfully a second attempt proved successful.

The big screen at the foot of Taipei 101 showed the elite runners completing the challenge whilst the rest of us lined up ready for our starting slot.  I shuffled forward to the start line not knowing what lay ahead or what pace to start at.

Upon entering the nondescript stairwell I started with the two steps at a time technique at a speed that could more accurately be described as walking up rather than running up.  This, along with using the arms to haul yourself up by the handrail is apparently the favoured technique for completing the 2,046 steps up the 91 floors.  After the first five floors, with two flights of steps per floor, fatigue meant I resorted to going one step at a time, trying to maintain a steady pace.

Determined not to stop at any of the regular drink and rest areas the subsequent floors became ever more energy sapping until a second wind arrived at the half way point.  Realisation that I was going to complete the challenge without stopping arrived at floor 80 with the remaining 11 floors passing relatively easily and at a faster pace.  I emerged into the open on floor 91 with a time of 23 minutes and 51 seconds, ranking me 538th out of 3182 – presumably the remainder of the 4,000 thought better of it on the day, failed the medical or didn’t make the top.  The winner was Poland’s Piotr Lobodzinsky with an awe inspiring time of 11 minutes and 8 seconds with Australia’s Suzy Walsham the first placed woman in a time of 13 minutes 16 seconds.

A much more relaxing trip down the tower was provided by the ear-popping lift with the morning rounded off with collection of certificates and goody bags.  With a vertical run now ticked off the list of challenges, what other interesting, challenging and yet achievable events are on the horizon?

Read a local report of the event

The Taipei 101 Run Up takes place at the start of May each year with online entry available at http://www.taipei101-runup.com.tw/

Just a couple of the interesting challenges available Worldwide can be found below, get in touch if you have any suggestions or need travel insurance for the event you’ll be undertaking:

Pyongyang Marathon – North Korea – Though overseas entrants were banned this year, keep an eye out to see if restrictions will be lifted in 2016 to give you the opportunity to pound the streets of this secretive state.

The Marathon Du Medoc – France – 26.2 miles interspersed with frequent wine and food stops.  Perfect for those needing liquid courage to complete the course.