How to be snap-happy with your smartphone!
Thumbs-Up to the winners of our Keep Travel Fun Competition! 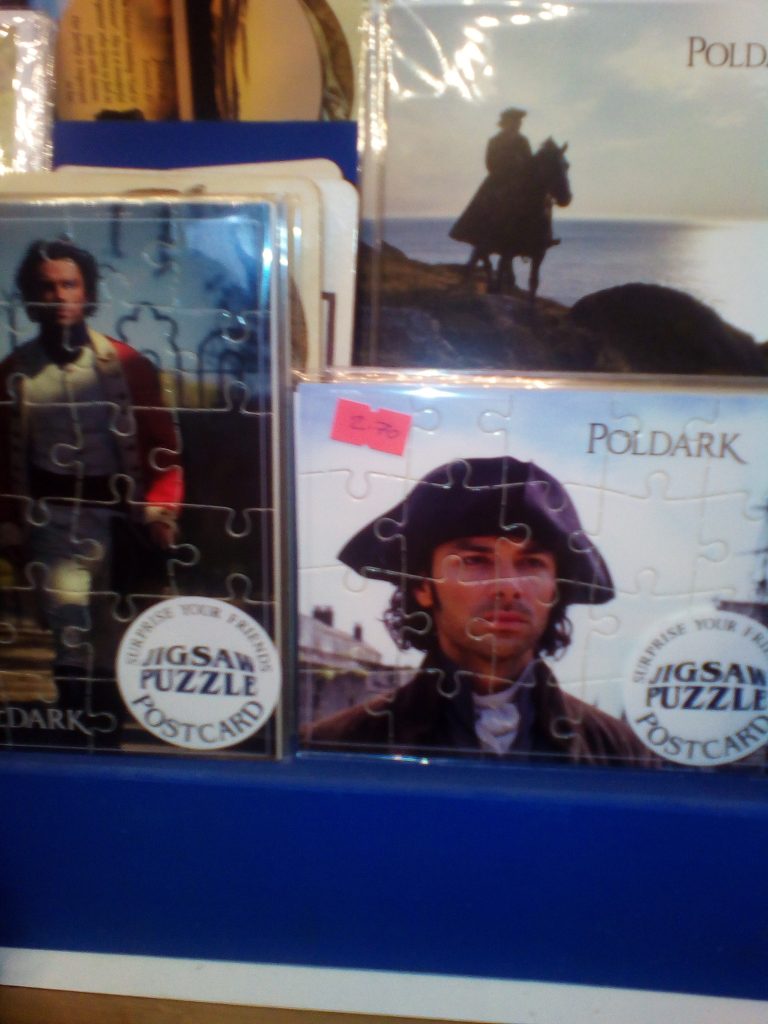 I have a lot to be grateful to the TV programme Poldark for…no, really! Not only is it a staple watch in our house at 9pm every Sunday evening, but it also inspired my first ever trip to Cornwall….

It is a fair trek from the South East of England, to the extreme South West of England, to get to Cornwall, but it is well worth the roadtrip, to get to a county with such a unique character, dramatic coastline, and not to forget – cracking cornish pasties and cream teas!

We broke our journey up by spending a night in Torquay, in the  Premier Inn (it’s an 18th century seafront mansion, with a great view from rooms overlooking the sea) We were pleasantly surprised to find that the infamous ‘Grosvenor Hotel’ of ‘The Hotel’ TV show, was just around the corner, and took advantage of the opportunity to get a few photos at the front (albeit I think Mark, the eccentric but loveable manager is no longer in situ).

The following morning after a good night’s sleep, we headed to the ‘English Riviera Wheel’ which dominates the seafront skyline, and Google tells me that it is taller than Nelson’s Column at a height of nearly 60 metres. The enclosed glass gondoliers move slowly round, for a couple of rotations, and provide a great view of the bay, and beyond. I must admit that I felt a little uneasy, as we ascended higher than the treetops, but the kids absolutely loved the experience, and didn’t even worry that the capsules were swaying pretty hard in the wind! You can find out more information about ticket prices etc here.

Following on from our Devonian stopover en route, we then made it to Cornwall itself, where we could begin our foray into the local area and attractions. In truth, we were spoilt for choice about where to head,  our choices were also dictated by the time available and our proximity to them, as Cornwall covers such a large area, it can involve a lot of driving to get where you want to go.

A particularly useful leaflet in plotting our excursions, was ‘A Guide to Poldark locations’ produced by the Cornish Mining World Heritage organisation, which pinpoints locations which have been used in filming, as well as related mining heritage attractions.

Whilst understanding that we were unlikely to spot Ross Poldark galloping across a clifftop astride his trusty black stallion, we were keen to see for ourselves some of the stunning locations and backdrops of the popular TV show, which is currently airing it’s 3rd series on BBC1, in the UK.

The wild and rugged landscapes and coastline of Cornwall are the perfect setting for the 18th century drama, laced with romance, social history and action-packed drama aplenty. The series is also a great showcase for all that Cornwall has to offer, and many tourists are lured by the prospect of idyllic and unspoilt beaches, windswept clifftop walks, and the endless, sweeping expanses of Bodmin Moor.

We didn’t however, restrict ourselves to purely Poldark-related excursions, but also cast our net further to other attractions that we could reach (and also make use of our National Trust Membership card). Here are a few places that we particularly enjoyed: 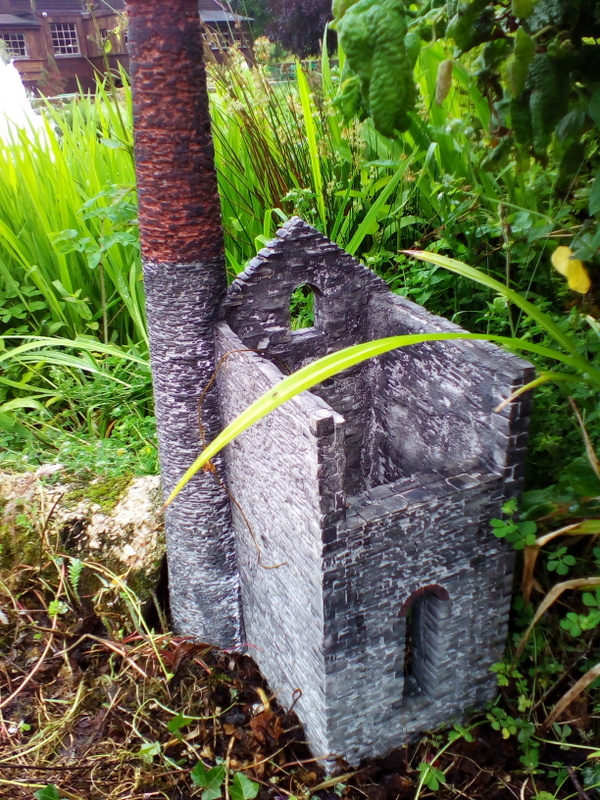 Apparently, the Mine used to have a different name (Wheal Roots), but was astutely renamed  in honour of  the previous 1970’s series by adopting the name ‘Poldark Mine.’ Whilst the name may not be truly authentic, there is an awful lot that is. The mine is now set in picturesque gardens and offers the unique experience of an underground guided tour of part of the mine that is still accessible. Our talk was delivered by a guide who was clearly very knowledgeable and passionate about the history of mining, and who passed round examples of the rock that was mined, explained how it was then processed, before being turned into tin. It was all fascinating, although also, hard for us to comprehend just how challenging and dangerous a job, mining was – with children as young as 10, venturing underground to earn a living for their family to help them survive. Of course, the best bit was heading below ground to marvel at the ingenuity and danger involved in mining a lode, and at the sheer skill and stamina of the miners involved. Underground mining scenes from both the current (and first) series of Poldark were filmed here, and there is a real sense of atmosphere within the damp confines of the rocky tunnels and rooms that we were able to explore, with our guide.  The tour brings to mind the tragic accident underground, where Francis Poldark, met a watery death by drowning. The kids loved wearing their yellow miner’s hats, and they also thoroughly enjoyed browsing in the shop afterwards and disposing of some of their holiday spends! See more information about Poldark Mine. 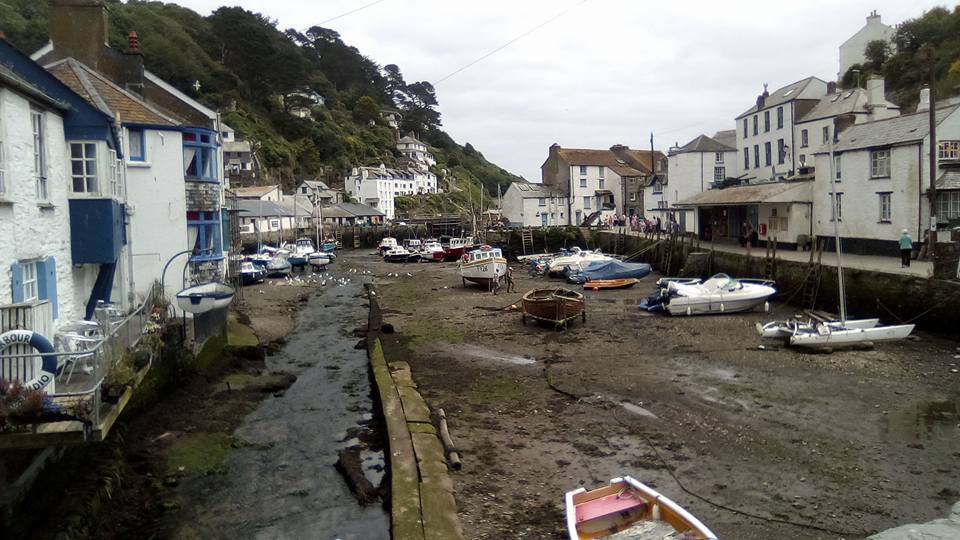 This is a beautifully picturesque fishing village which looks like it’s been conjured up from the pages of a picture book, but it’s real! Even the walk from the car-park is a pleasure, as you meander past an eclectic collection of shops, and past houses fronted by a stream criss-crossed by drives and bordered by beautifully planted flowers. The undoubted piece de resistance, is however the termination of your walk, the working harbour of Polperro, where fishing vessels sit waiting on the silt, surrounded by a glorious array of quaint and higgledy-piggledy houses and pubs, jostling for space, and creating interesting twittens and walkways in the spaces between. We had lunch in the Museum Tea Room, Polperro Harbour, and enjoyed huge and delicious Cornish pasties and also a decadent Cornish cream tea – yum! I’m sure that the food was even more delicious, with the very pleasant panorama of the harbour, visible through the open window. We also enjoyed a very bracing but breathtaking cliff-top walk that afforded stunning views over the harbour, and the houses climbing the hills surrounding it. There were also some very handily placed shelters and benches to sit atop the cliff and watch the angry sea lashing the rocks below. The Museum Tearoom on Trip Advisor. 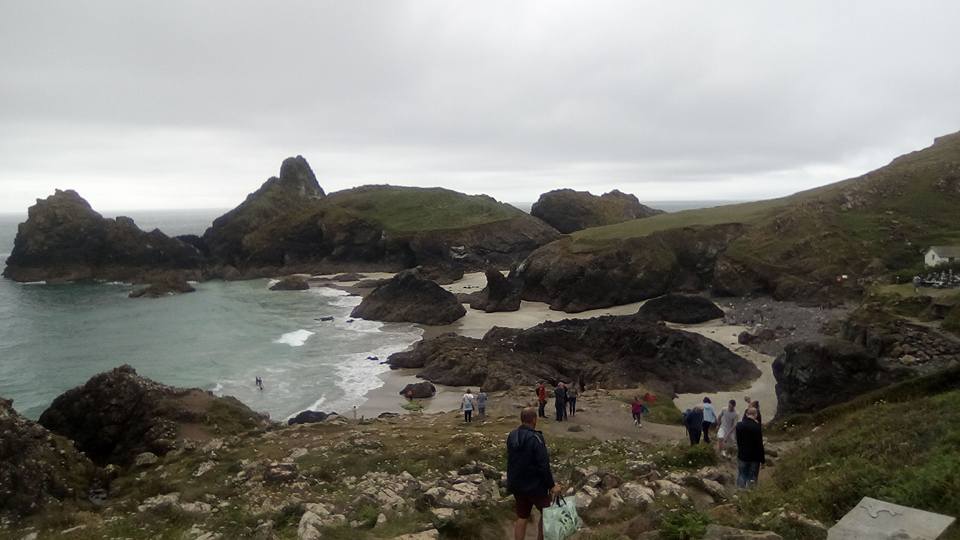 This beach is a National Trust one, and is definitely worth a visit. If you watch Poldark, you will be very familiar with it, as it is the favoured meeting place of young lovebirds Drake Carne and Morwenna Chynoweth. It was really exciting to visit the beach in the day, and then see it immortalised on screen in the evening, curled up in bed watching Poldark on the hotel room TV set. Like Drake and Morwenna, we too walked across the white sandy beach and paddled in the turquoise sea. I’m not sure that they also enjoyed a coffee at the National Trust cafe situated there, but you get the idea! As a beach it really has it all – apart from the gorgeous sea and sand, there are also rock stacks, islands and caves to explore, when the tide is low.  There is a fairly uneven and rock-strewn walk to get to and from the beach, but it is well worth the effort, when you are rewarded by such a fabulous sight when you reach the beach below. It was a bit wet and wild when we were there, with the waves whipped up to angry peaks, so not ideal swimming conditions, but a not-to-miss chance to see the power and changeable nature of the sea, close up.See more information about Kynance Cove here. 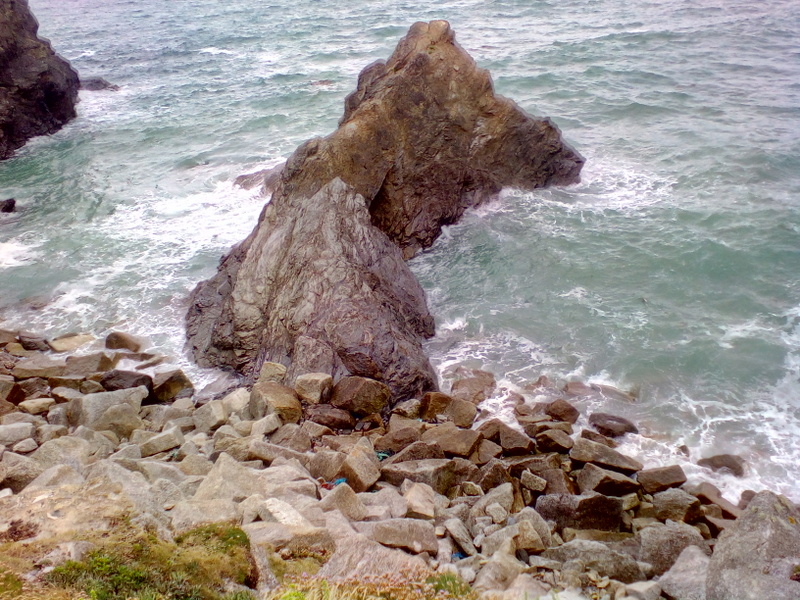 Other nearby National Trust beaches that we visited, were those at Gunwalloe (Dollar Cove and Church Cove) which consists of two contrasting but beautiful beaches, separated by a beautiful medieval church (St,Wynwallow) with the beach and sea, visible through the hedge in the churchyard. When we visited, the charming little church was open to look inside, and it was interesting to potter round the churchyard, and look at the ancient and ornately-decorated graves of locals long-since passed. Dollar Cove was named after a treasure that that it’s been claimed is sometimes found there. A Spanish ship was lost just offshore in 1669, and was said to be laden with silver dollars. This bounty still attracts treasure hunters from around the world, to hunt for the booty. Poldark-afficionados may spot that Church Cove featured in the second series of Poldark as the setting for a dramatic late night shipwreck scene – so fiction sometimes very nearly mirrors rumoured reality! Dollar Cove also featured more recently, as the setting for the return of Ross and his band of rescuers, with Dr Enys, freed from the horrors of jail during the French Revolution. Find out more about Gunwalloe here. 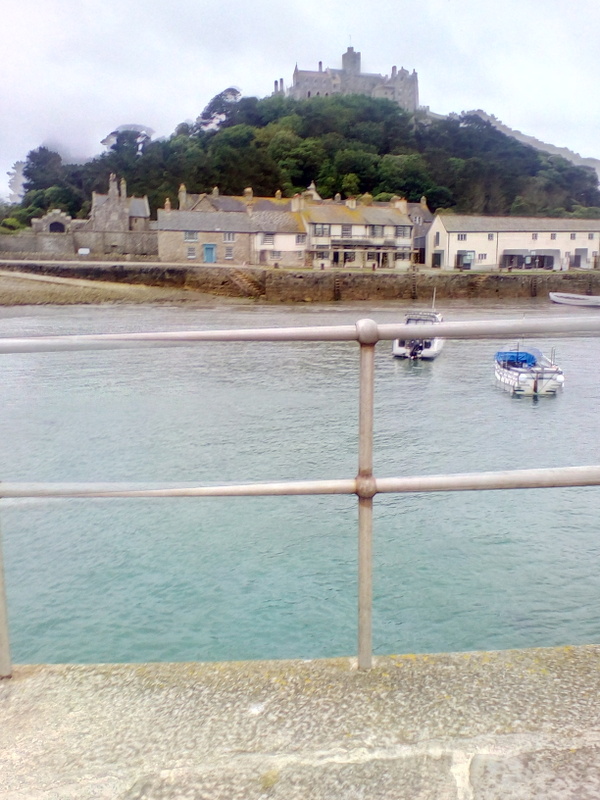 Whilst this attraction hasn’t appeared in Poldark to my knowledge, it certainly wouldn’t look out of place, and would no doubt make a unique and historical setting for any TV drama. This is another National Trust property (and island, to be precise!), and makes an exciting destination for children of all ages (even adults) to experience. St.Michael’s is a rocky island topped by a medieval church and castle – but the best bit, is that it can only be reached by boat at high tide – and you can walk across the uncovered causeway, when the sea recedes at lowtide.

It is intriguing to think that some people still actually live and work on the island (I pondered on how they got their shopping over, but there were a lot of boats in the small harbour!)

It is a bit of a challenging walk up a large hill, to get to the castle itself (which is still home to the St. Aubyn family), but it is well worth the trek to explore the castle itself, and also to have a fantastic view over the sea back to the mainland, but also to look down upon the beautiful cliff-side seaside gardens, that cling incongruously to the granite cliffs below.

We luckily got our timings just right, with regards to the tide, as we enjoyed a short but exhilarating boatride over, but enjoyed the novelty of walking back to the mainland upon the exposed walkway, that had been completely covered on our way over earlier. My daughter enjoyed flying her newly-purchased kite as we made our way back across, and it is somewhere where I would like to return, and enjoy all over again. See more details here.

We have only just scratched the surface of what Cornwall has to offer, and we are already planning a return trip, but for now I will content myself with seeing places that we visited , featured in Poldark every Sunday evening. A great example of ‘literatourism’  – where a trip or journey is inspired by something that you have read (or in my case, watched, and read – and dreamed!) For now I will content myself with converting everyone in the office to the joys of Poldark –  the perfect mix of escapism, social history, and Cornish setting.

To see more photos from our trip to Cornwall, look up gowalkabouttravelinsurance on Instagram.