Past Postcards – Handheld History & Travel
Tell us about your Working Holiday and get a £20 Amazon voucher! NOW CLOSED 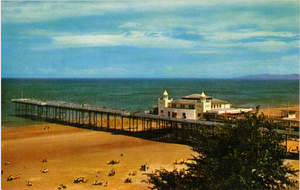 There isn’t any writing on this week’s postcard, but I thought it would be a nostalgic choice, due to the impending sad fate of Colwyn Bay Pier…another Victorian Pier to sadly bite the dust.

The Victorians built many piers during the boom years of holidaying by the sea. They were originally built as simple wooden landing stages for boat trips but evolved into entertainment venues complete with elaborate pavilions, intricate ironwork and evocative lighting.

We are based in Hastings, East Sussex, and our much-loved but sadly neglected pier famously burned down in October 2010. Thankfully, it has now been resurrected (albeit in a more minimalist style) and remains an attraction for tourists and locals, and was even voted ‘Pier of the Year 2017’

Sadly, the crumbling framework, costs of upkeep and change in tourism habits can make it very hard for Piers to survive these days, and sadly, Colwyn Bay Pier, pictured in the postcard, is soon going to be dismantled. The Pier was built in 1900, and included a massive 2, 500 seat pavilion in a Moorish-Revival style, which must have been magnificent in it’s heyday.

We can only guess at the era depicted in the postcard as it is undated, but the photo looks like it may have been taken in the 1970’s or 1980’s. There are visitors visibly promenading on the pier, and the main pavilion building looks to be in good repair. Sadly, this is a stark contrast to the dereliction of the pier today, which is now closed to the public and awaiting demolition.

The toxic cocktail of events leading to the pier’s demise is a sadly familiar once, consisting of financial difficulties, multiple owners, fires and failed regeneration attempts. Read more here about the plans to demolish it and redevelop it as a shorter structure.

It seems that piers often have to either repurpose, downsize or be completely reinvented in order to have a place in the modern UK seaside resort.

It is thought that Colwyn Bay Pier will have been dismantled by the end of April 2018 (despite a fair amount of local opposition), you can take a look at the redevelopment plans, and more of the story that has brought the pier to this point, here.

You can take a look at more of the attractions of Colwyn Bay here.

It is sad, looking at the vibrant image on the front of our postcards to think of the demise of Colwyn Bay Pier…but let’s hope that it can be remembered, celebrated,  and rejuvenated in some form, in the future.